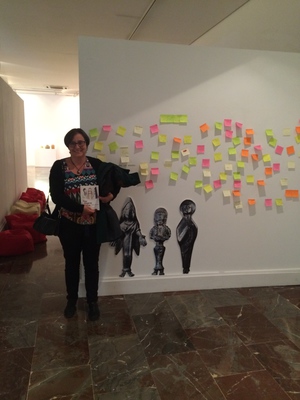 (Merits related to experience in management and administration)

1 six-year period of investigation recognized by CNEAI (12/31/2017)2 five-year periods, the last of them with a DOCENTIA evaluation

Professor Paula Jardón Giner is a specialist in Prehistory, Teacher Training and Heritage Teaching. With initial training in Geography and History and a thesis on prehistoric technology in traceology, he began his research career with a scholarship at the University of Liège (Belgium). He presented his doctoral thesis in 1996, he constituted the company D'arqueo CB (1995) and later Darqueo, study and dissemination of Heritage SL (2004) whose corporate purpose is archaeological research and Didactics of Heritage. From 1995 to 2009 she worked as a researcher in said company, with research contracts in France and Belgium, which generate scientific publications. She also teaches in Secondary from 1999 to 2007. She is an associate professor of Prehistory at the UV from 2002 to 2006. These activities generate research in education that is also the subject of publications. Since 1996 he has been a member of the Gea-Cio group of innovation in didactics of the social sciences, with which he participates in research-action researches in education. In 2009 he joined the University of Valencia full time. She develops his research activity in Teacher Training and Didactics of heritage and community development, she is integrated into the El Salt research project to develop a research line in citizen participation.In March 2017, he changes from the area of ​​Didactics and school organization to the area of ​​Didactics of social sciences, because of her line of research in Heritage education.

Her scientific activity is integrated into projects of the teams of the University of Valencia, the University of Liège, the Royal Institute of Natural Sciences of Belgium, the Laboratory of the CNRS of Carcassonne, the Prehistory laboratory of the Societé Prehistorique française, the Mission French in Central Asia, the University of San Luis Potosí (Mexico) and the University of La Laguna (Tenerife). Researcher at the CREARI Research Group, at the Institut de Creativitat i Innovacions educatives at the University of Valencia and the PASTWOMEN Project. It is part of the following innovation groups: Gea-Clio, Espaicinema of the Faculty of Teaching and Pasarel·la Docent in the Master's degree for secondary teachers.
She has participated in the museum design of the Prehistory Museums of Valencia, Archaeological Museums of Alicante, Alcoi, Villena, Almassora, Petrer, Gandía, Crevillent, Bicorp and Novelda. She is co-author of the projects of the Archaeological Park of the Cuevas de la Araña (Bicorp), of Morella la Vella and Aras de los Olmos Ecomuseum. Curator of the exhibitions: A la Llum de la Llar, Castells Valencians, Els ibers and Prehistòria i Cinema. Historical advisor on the film Sa Majesté Minor by Jean Jacques Annaud.

Scientific articles in the last 10 years:

2 five-year periods, the last of them with a DOCENTIA evaluation

Techniques or specialities you are trainned in